If you didn’t know Coca-Cola is just an umbrella for a few other popular drink brands. They own drinks like Fanta, Sprite, Dasani, Fuze and more. Well, they are cutting at least 200 beverage brands by the end of the year. According to CNN, the beverage giant had already announced that it will discontinue some beloved, if outdated, drinks, like Tab, Zico and Odwalla. Thursday was the first time the company said it would get rid of 200 of them. Coca-Cola said that the cut down
Deandre Yard (DeandreNYC(

Netflix Subscription Numbers Are Down

Are the “Netflix and chill” days on a decline? Or is Netflix just experiencing the cyclical woes of the market. When the global pandemic was in its initial stages and people around the world were confined to their homes, Netflix subscriptions skyrocketed. The Washington Post reported that Netflix received a record 16 million subscribers worldwide at the end of March. By the summer, Netflix’s growth began to slow down. Subscribers dipped to 2.2 million over the summer. “As exp
De&#39;Andre Yard (DeandreNYC)

San Francisco might be ready for the “CAREN” act (Caution Against Racially Exploitative Non-Emergencies) which was introduced in July at a San Francisco Board of Supervisors meeting. Tuesday, the board made a unanimous decision to pass the act, upon first read. The bill will face one more round of voting, before being sent out for the mayor to sign. As you may have guessed, the name is a play on the social media moniker given to people who make racially charged 911 phone call
Truth (@truth_bn)

Dionne James Soulutions is a vegan hair care line designed to cater to African Americans that is taking the beauty industry by storm. After breaking into major online stores such as Essence Shop and Walmart.com, it is clear that the momentum for this business is picking up. The company launched at the beginning of the pandemic and is doing better than what some may expect. To learn more about this pandemic success story we caught up with the soul behind Dionne James Soulution
De&#39;Andre Yard (DeandreNYC)

R Kelly Attacked In Prison: Inmate Says He Did It For Clout

R.Kelly’s attorneys are claiming there is video evidence of Metropolitan Correctional Center in Chicago neglecting Kelly while another inmate attacked him. According to a prison report, the incident was defused when a guard used pepper-spray on the attacker. This is just one out of a slew of misfortunate stories we’ve heard about Kelly’s living conditions while behind bars. Just last month, the appeals court in Illinois denied Kelly’s appeal to be released on bond. Citing tha
De&#39;Andre Yard (DeandreNYC)

Leslie Jones Does Not Miss SNL At All

Leslie Jones was able to live the dream many comics have, when she secured a role on NBC’s flagship program Saturday Night Live. The 53-year old actress got her start in 2014 as a writer for the show. In season 40, Jones was added to the main cast after a controversial one off appearance. From there, her career hit the ground running and she hasn’t looked back since. Jones left the show in May of 2019, and is now hosting a revamped version of “Supermarket Sweep,” premiering S
Heather Grant (@_hspeaks)

The COVID-19 pandemic has separated the American population in a crazy way; the believers and the non-believers. It’s crazy to think that there are people negating the existence of a virus that has claimed the lives of millions worldwide, but here we are. There are some non-believers who attribute their skepticism to their distrust in the government, their religion, and most popular reasoning is health knowledge. Fitness influencer Dmitriy Stuzhuk was one of those non-believe 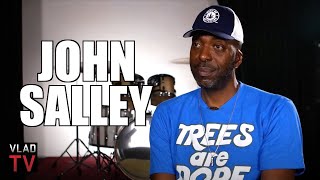 John Salley Had Some Tea to Spill on VladTV

There are only a few major media pillars that are still taken seriously. Artists and socialites alike need the promotion that a good interview can give but also need to be exclusive with who and what they allow. VladTV has been one of the most popular media platforms where guests are able to speak freely on topics they might not have touched on had the interview been taken somewhere else. While it can be a pain sometimes to search for all the different parts of the interview,
De&#39;Andre Yard (DeandreNYC)

Melania Speaks Out About Tell All Book And Leaked Audio Recordings

This past week it was announced that Stephanie Winston Wolkoff, author of the book “Melania and Me” has been sued by the justice department for violating an NDA and they are seeking to seize all proceeds from the book. Wolkoff’s scathing tell-all book revealed very intimate details about the first family that she had witnessed throughout her 10-year relationship with them. Not only did Wolkoff reveal family details through the book, she also leaked voice recordings of intimat
Heather Grant (@_hspeaks)

Watching musical artists transition into other fields is always pleasant; there are times that these additional talents come as a genuine surprise. Alicia Keys is no stranger to film sets after her time filming movies like “The Secret Life Of Bees” and “Smokin’ Aces”, following her experience as a producer on the Netflix Original “Work It” She's ready to branch out on her own. Alicia Keys is in line to produce a currently untitled Netflix Romantic-Comedy whose goal is to div
12
3
45